This feature has been in beta in Docker Cloud for some time now, and I wanted to find out what all the fuss was about.

The only ‘challenge’ that might arise is that the Azure account must be Global Admin. If you only have partial access, you will need to get in touch with the supreme owner of the Azure account to activate this integration between Docker Cloud and Azure.

For some reason, I always think of beeeeeeesssss when I hear this.

Navigate to “Swarms” tab, hit “Create” and follow this guide:

The guide offered me no resistance.

When it is finished, click the swarm and get this:

Copy and paste into a shell. I recommend trying out Ubuntu for Windows; it is great for doing Linux stuff without an actual Linux instance. Running “docker ps” will now show you this:

The command/shell is now running against the new Swarm and running “docker ps” will now show you this:

It is also possible to get here without the copy and pasting of the docker run command. In Docker for Windows, right click the white whale at the bottom of the screen and expand the “Swarms” option. Click the swarm (in this case the “swarm-poc”) and it will open a CMD where the Docker CLI is connected to the Swarm. 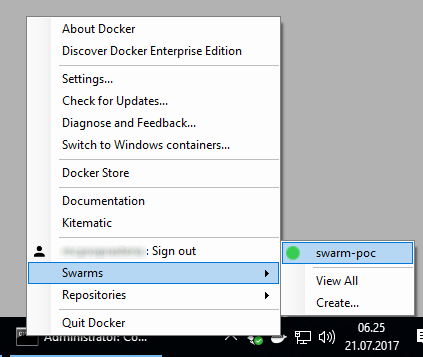 Since Docker CLI is now running against the selected Swarm, any command now runs directly against the swarm and not the Docker Host running locally in Hyper-V.

To see the swarm running, run this command:

This however will create a Hello World container running on the Manager, and that is not correct at all. To make run Hello World on one or more of the Workers we need to create a Docker Service.

Running Hello World in the Swarm

The commands to be used with Docker Swarm is listed here: https://docs.docker.com/engine/reference/commandline/service/

The “Hello world” webapplication is now running in one of the workers and is reachable from the internet. You can get the public IP from either Docker Cloud or the Azure Portal:

In Azure portal, find the Resource Group and “externalLoadBalancer”:

Deallocate and save money

Deallocate the VMSS instances in Azure in order to save money. They do not show up in the Virtual Machine tab, but click on the Resource Group for the new swarm will show them. Remember to start them up again before using the swarm.

My three nodes (1 Manager, 2 Workers) does not cost much though. Yet. So far they only have a running fare at approx. 0.5 euros a day or 10€ (11$ or 101 NOK) for a month. Some people will call that inexpensive, low-priced, low-cost, economical, competitive, affordable, reasonable or free. At least Google Dictionary do. Except the last one.

In conclusion, we have now a Docker Swarm up and running about that can run Containers with workloads remotely instead of running them in your local Docker Host instance.